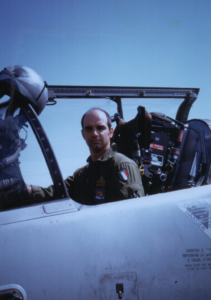 Born in Catania, on May 21st 1961, Capt. Fabio Consoli joined the Italian Air Force in 1980, when he attended the Air Force Academy with the Zodiaco III Class. He started his career as military pilot firstly on the Siai Marchetti SF260, on which he soloed in January 1981, continuing on the T-37 and T38 aircrafts of the Euro Nato Joint Jet program at Sheppard AFB, Texas, where, in 1995, he gained his American and Italian Military Pilot Wings.

After completing his training on the G-91T and TF-104G aircraft, in 1996 he was assigned to the 28th Squadron “Witches” of the 3rd Wing, Villafranca di Verona AB, where he flew the F/RF 104G and was declared combat ready in the recce and fighter bomber roles.

Selected to join the Reparto Sperimentale Volo ( The test outfit of the Italian Air Force), he attended the USAF Test Pilot School, Edwards AFB, California, where he obtained the Test Pilot qualification with class 90B. In this role he was assigned to the Eurofighter program and he was the first Air Force pilot to fly the Italian Typhoon prototype DA3.
In 1997, with the rank of Lieutenant Colonel, he assumed command of the 14th Squadron of the 2nd Wing, on the AMX aircraft, at Rivolto AB. During his command he participated to several war missions during the NATO operations over Bosnia-Herzegovina.

This website uses cookies to improve your experience while you navigate through the website. Out of these, the cookies that are categorized as necessary are stored on your browser as they are essential for the working of basic functionalities of the website. We also use third-party cookies that help us analyze and understand how you use this website. These cookies will be stored in your browser only with your consent. You also have the option to opt-out of these cookies. But opting out of some of these cookies may affect your browsing experience.
ACCETTA E SALVA