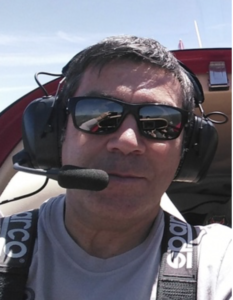 Born in Taranto, south part of Italy, on Jan 23rd 1965. I’ve always been interested in aviation since young, attended an electrical engineering high school, then I applied to Italian Air Force as Pilot. After 14 years I became a commercial airline Pilot. I have always been an Instructor Pilot, both in Air Force and on commercial aviation, and in Alitalia Flight school based in Alghero (Sardinia) on PA 42. Enlisted in ITALIAN AIR FORCE in 1984. I spent 2 years between Flight Academy and flight schools. Graduated fighter Jet Pilot in 1986. Performed a combat ready and special trainingSection Leader at 32Th Wing in Brindisi. At the and on 1989 I perform a Instructor course at 60 Air Brigate sited in Amendola (FG). I served as Instructor Pilot on Fiat G91T. In 1991, I win the title of istructor of the year on G91T. In 1992 I carry out the conversion on the AMX aircraft an after on AMX-T as instructor pilot. During my service at 60 Air Brigate I was qualified for test flights on G91 T, AM-X and AMX-T, and I served in that base until left Air Force. Great experience as trainer in multiple topics, such as VFR, Aerobatic, IFR, Formation, Basic Combat Fight Maneuvers, Low Level navigations, Firing at Range and In Flight refulling.

Hired by a Major Airline in Italy in 1998, spent many years flying all over the world with short haul and long haul experiences.