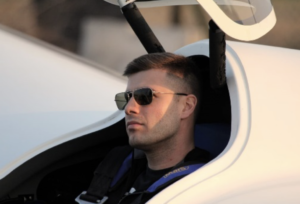 I was born in Reggio Emilia , north of Italy, on December 7th 1992. Since I was a child I dreamed to become a pilot and I’ve always been interested in aviation in such a way that at the age of thirteen I left home to attend an aeronautical high school in Forlì.

When I was sixteen I got my Glider Pilot License and then the aerobatic rating. My great passion for aviation led me to join the Italian Air Force in 2012 and after 5 years of Academy I spent almost one year in the U.S. flying on the T6 Texan II, at Sheppard Air Force Base, Texas, where Italy plays an important role in the ENJJPT NATO program.Back in Italy I graduated Military Pilot on the MB339CD and I’m currently flying on the modern M346 fighter jet.I often fly gliders, ULM and GA aircrafts flying formation and aerobatics and during my career I’ve flown different kind of aircrafts, from a small single engine piston to a fast jet.