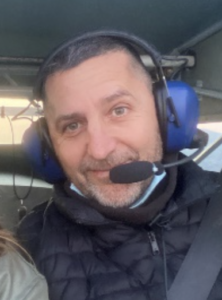 Born in Varese on 03 of August 1966, crazy for aviation since the beginning for both military and civilian airplanes. I have got my first licence at 18, flying later on single and multi-engines propeller planes (equipped with pistons and turboprop engines), even biplanes (Stampe), glider, motor glider and seaplane.

In 1996 I left the Air Force to join Alitalia where I flew as First Officer and Captain on MD80 and B767.

As Military Flying Instructor i taught how to fly basic, acrobatic, instrumental, formation and how to apply tactical techniques. My experience continued teaching colleagues on A320 as Line Instructor and Simulator Instructor (TRI).