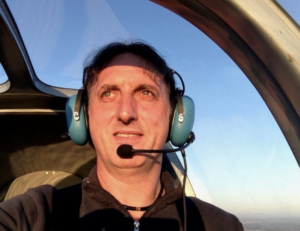 Born in Padua on September 14, 1966, I attended the Scientific High School. At 16 I started flying at the Padua local aeroclub, achieving my airplane pilot license the following year. I joined the Air Force in 1986 as a pilot with the 99 ° A.U.P.C. (Military Pilot Officer Training).

Patented Military Pilot , I was assigned to the 14th Fighter Bombers – Reconnaissance Group – 2nd Wing in Treviso airbase in Italy. I have achieved all the qualifications required, by the Combat-ready pilot to the qualification of Chase – Test Pilot. In 1991 I obtained the qualification of  Fighter Weapons  Instructor at the Decimomannu airbase. In the same year we moved to the Rivolto airbase. In 1992 I attended the Tactical Leadeship Program course at the Florennes base in Belgium. After several operational Nato missions and gaining experience in Vfr/Ifr day and night formation flight, in 1997 I moved to the Alitalia  airline as a first officer until 2014.

I have obtained the following type ratings: