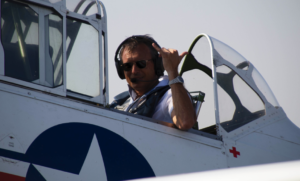 Born in Italy and lived in Africa till the age of 20. Flying has always been second nature since the first flights in the Italian Air Force.   In 1996 My other passion is aerobatics where I was Italian Champion in the Sportsman category in 2000 and third the following year in the intermedia category.

Joined the Italian Air Force in January 1986 and completed the flight course in September of the following year. First duty was as flight Instructor one the MB339/A. Once completed the Flight School tour was assigned to a Fighter Bomber squadron (102 Squadron) in Rimini on the F104. Once the F104 Bomber was  dismissed and the Squadron moved to Ghedi (close to lake Garda) the new aircraft was the PA200 (Tornado IDS). Keeping into account my previous experience as an instructor I became Flight Instructor on the Pa200. Great experience as trainer in multiple topics, such as VFR, Aerobatic, IFR, Formation, Basic Fighting Maneuvers, Low Level navigations, Firing at Range, air to air refueling.

He has been Instructor at the Alitalia’s Flight School in Alghero and now Head of Training of an ATO in Brescia, continuing his passion for training since now.