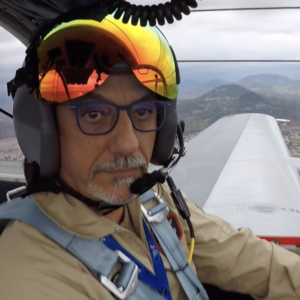 Born in the northern part of Italy, close to Venice, on May 3rd 1960. I’ve always been interested in aviation since young, attended an aeronautical high school, then I applied to Italian Air Force as Pilot. After 7 years I became a commercial airline Pilot, then Captain. My passion for flight lead me to the States where I opened a small Company, an Helicopter Flight School ( TWINAIR Inc.) together with my twin brother. I have always been an Instructor Pilot, both in Air Force and on commercial aviation, plus a manager for about 10 yrs on aviation industry.

Hired by a Major Airline in Italy in 1987, spent many years flying all over the world with short haul and long haul experiences.

In 1998 became a Captain and a year later Type Rating Instructor on Airbus Family A319-320-321, after 4 years became Type Rating Examiner on same aircraft. In 2004 I transitioned  on MD 11 as TRI Captain and then TRE.  Moved back on A320 for another 5 years due to Company restructuring and closure of cargo department, eventually moving to the final duty position as TRI on Boeing 777.