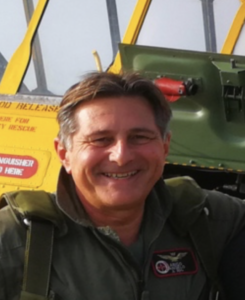 Born in the northern part of Italy, Milan, on August 16th 1962. I’ve always been interested in aviation since young, attended an aeronautical high school, then I applied to Italian Air Force as Pilot. After 5 years I became a commercial airline Pilot, then Captain. My passion for aerobatic and formation flight led me to start an aerobatic formation team with two Pitts Special, participating from 1996 to 2001, to almost all air shows in Italy. From 2016 I share with an ex Airforce colleague a T6 SNJ6, and with another dear fellow that has an Harvard II, we are working on a display team project with T6s

Enlisted in ITALIAN AIR FORCE in 1985, spent one year and half between Flight Academy and flight schools. Graduated fighter Jet Pilot on September 1986. I was assigned to the 2’Stormo (Wing) 14’ Gruppo (Squadron) as Fighter Bomber and recce on Fiat G91 R. Combat Readiness achieved ten months later. Section Leader qualification later on. At the end of 1988 I was sent to 60Th Training Wing in Amendola FG, then assigned to 61st FTW in Lecce, at 212TH Squadron, where I served as Instructor Pilot until left Air Force. Great experience as trainer in multiple topics, such as VFR, Aerobatic, IFR, Formation, Basic Fighting Maneuvers, Low Level navigations, Firing at Range.

My commercial airline career has developed on several Airlines, spanning from A320 to B767 and the newest state of the art B787 Dreamliner.   I am FI (A) Aerobatic Easa qualified.