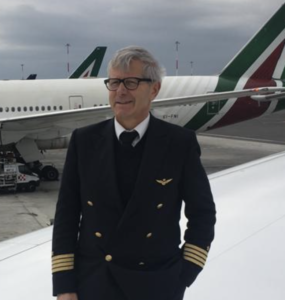 I was born in Venice on February 13th 1960. I have always been interested in aviation since young.
At age of 18 I gained my wings and obtained the PPL  and at 19 I attended the selection to enter the Air Force.
Joined the It.A.F. in 1980, then spent 3 years of study and training at the Air Force Academy and Flight Schools.
In 1983 he graduated as a Military Pilot, eligible for the Fighter line and first classified in my class.
I followed the Leader training at 60th Training Wing in Amendola, and subsequently been assigned to the 61th FTW in Lecce, where I served as a flight instructor.
I gained a remarkable experience as an Instructor in many disciplines, VFR, IFR, Aerobatics, Formation Flight, Basic Air Combat and Low Altitude Flight.
Leaving the Air Force I was hired in a large Italian Airline Company in 1986, I flew both short, medium and long range.
I have been commander since 1994 and a few years later Line Trainer on MD82.
Since 2003 I have been Cpt on the B777, since 2006 TRI and since 2009 TRE.
I have reached about 18000 hours of scheduled flight, of which 3500 as Instructor and Examiner; I also have about 2000 hours of Flight Simulator as an Instructor and Examiner.