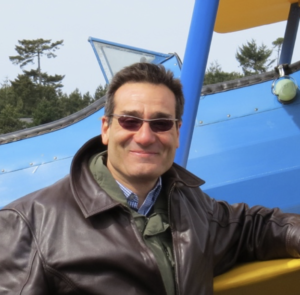 Born in Novara, north west part of Italy, on April 28th 1971, I’ve always been interested in aviation since young, when I was 18 I obtain my PPL/H license and after completing my studies the following year graduating as technician specialization in aeronautical construction at I.T.I.S. G. Fauser in Novara I applied to Italian Air Force as Pilot.

Enlisted in Italian Air Force in 1992 with the class “110° AUPC”, I spent 2 years between Flight Academy and Flight schools until my graduation as Jet fighter Pilot in 1994. I performed a special training as Section Leader at 32nd Training Wing in Amendola FG, then immediately sent to 61st FTW in Lecce where I served as Instructor Pilot on Fast Jet.

After six years of duty I resigned from Italian Air Force to became a commercial Pilot, hired by a Major airline company in Italy in 1998, I spent many years flying all over the world with short/medium and long haul flights gaining good experience in all this topics, I flew MD80/82 and Airbus A319-320-321 on short/medium haul flight till 2010, than I transitioned  on Airbus A330 where I’m still employed as F/O on long haul flight.

My passion for flying has lead me to keep the desire to fly for fun even when I’m not on duty as commercial pilot continuing to fly during my days off with general aviation and sporty planes.