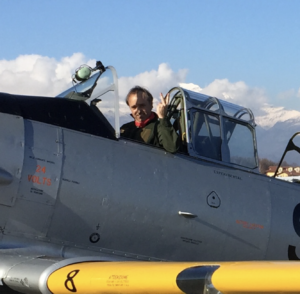 Born in Rome on Aug 1964, after the High School, at the age of 20, I joined the Italian Air Force as Military Pilot where I spent five wonderful years. Later on, I became Airline Pilot for Alitalia, where I’ve been working since 1990 and where I’m actually Instructor and Examiner Captain on A320 aircraft. In the last 5 years, I’m having fun, flying my warbird T6 “I-FKVE” in formation with the Harvard SNJ of my friend Giancarlo. In addition, since a couple of years, I’ve been taking part as Instructor in formation clinics held around Italy by Cpt Gux for H.A.G. (Historical Aircraft Group) Association.

Enlisted in Italian Air Force in 1985, I spent two years between Flight Academy and Flight Schools. Graduated Fighter Jet Pilot in 1986, I became Combat Ready on FIAT G91Y at the 101 CBR Squadron in Cervia A/B (Italy) where I finished my duties with the Air Force on March 1990, after achieving all the requested targets of a jet fighter pilot.

Hired by a Major Airline in Italy in 1990, I’ve spent many years flying all over the world with short haul and long haul experiences.
In 2000 I became Captain and one year later Line Trainer on Airbus 320 Family; in 2010 I became Type Rating Instructor on same aircraft. And finally, since 2014, I’m working as TRE always on type.